Including poems from over twenty five years of writing, ‘Flocks of Words’ , published in March 2017, is my first collection.

‘Here are love-songs to the hills of the Welsh borders, to children at play, to history, myth and mystery, encompassing a satisfying breadth of styles, both musical and highly visual. With a gentleness that hides a rigorous strength of vision, her poems persuasively inhabit the skins of both beast and human, and are equally at home in the past and the present.’

The title poem was the winner of the ‘Imagined Worlds’ Poetry Competition, organised by the Friends of Samuel Taylor Coleridge to celebrate the bicentenary of the publication of ‘Kubla Khan’

Poems in this volume have been published in The Curlew, Three Drops from a Cauldron, Far Off Places and The Woven Tale Press, amongst other publications. 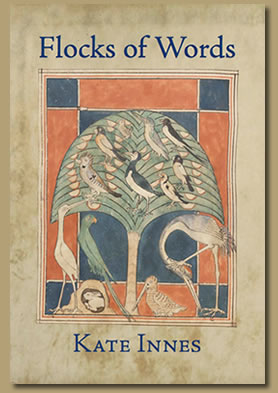 Flocks of Words includes many of the poems written during a residency at the Heavenly Lights Exhibition at Shrewsbury Museum & Art Gallery, featured in the video above.

‘Her imagery is often startling, panoramic, spine-tinglingly thrilling. Her music is the music of distant stars and of creation, sometimes almost Miltonian in its wonder and terror.’ Susan Haigh - Dundee University Review of the Arts

‘This is landscape poetry at its best.’ Pauline Prior-Pitt

‘a voice that is wise and musical.’ Deborah Alma – The Emergency Poet

The first print of 'Flocks of Words' has now sold out, but you can sometimes find a copy that flew the nest at a Shropshire Independent Bookshop.

at the edge of places we don’t belong.
It is found in the shadow of a hood
and the parted lids of a sleeping eye

even the twist of a rope that won’t tie or
the path that unwinds in a wood.
It gathers its strength on a threshold

it unfolds in the hinge of the door
is crouching under a dusty floor
where old shoes keep its border patrolled.

It hides, like teeth behind a kiss.
Children understand the places in between.
They know what cracks mean:
any stone could fall to the abyss.

Many of the poems in the collection featured in a special collaboration with the award-winning acoustic group Whalebone, also called Flocks of Words.

This powerful interweaving of music and poetry about the mythic landscape toured the region between 2017-19. Go to the Music and Poetry page for more information.

“Just wanted to share our gratitude for the wonderful performance this afternoon. Once the event began the atmosphere seemed to change and everyone tuned in to this beautiful, relaxing soundscape”   Ronnie Sturton – Shropshire Libraries 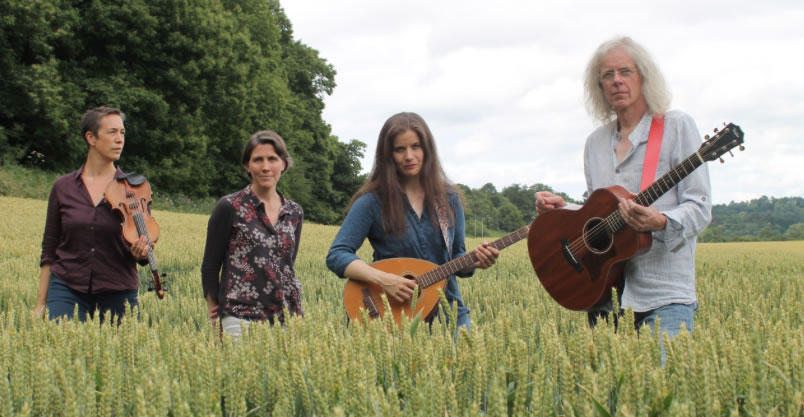