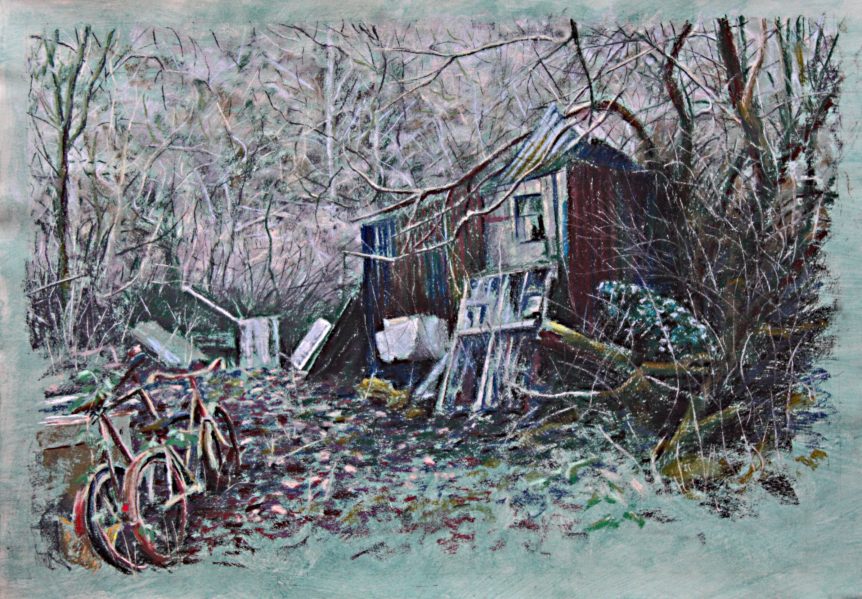 Since the start of the year, I’ve been collaborating with visual artist Andrew Howe, as part of the Encounters Exhibition at the Visual Arts Network Gallery in Shrewsbury, which opened on the 20th March. It has been a pleasure to work with Andrew, and to share ideas about mythic landscapes and the fugitive borders between wild and inhabited spaces.

This is the post he wrote about our collaboration. He explores the creative process of working together so well, that there is little I need to add. Only to say that the exhibition is on until the 28th April, full of exciting, powerful visual and poetic work. If you are in the area, I commend it to you.

In my post about collaborations, I mentioned that I have been working with three other writers/artists to make work for an exhibition called Encounters that opened this week at the VAN Street Gallery in Shoplatch, Shrewsbury.

The project was the idea of Ted Eames, and it brings together over 20 pairings of visual artists and writers, one artist making work in response to the other’s work.  There have been similar such collaborations in the past, but rarely in such numbers I suspect.  Having been involved in the installation of the exhibition, I had a chance for a brief preview.  I am fascinated by the diversity of work produced, and can’t wait to go back to spend more time absorbing it.

My own work comprises six paintings and collages with Kate Innes and Ursula Troche, and two poems with Paul Baines.  Perhaps on first viewing it appears quite diverse/eclectic, but there is a common theme which links everything, although this may not be immediately obvious.

In this first of three posts, I will discuss the work made with Kate Innes.

Of the three pairings, the work with Kate involved the most discussion and interaction in the development of each piece of work.  We found many common interests and a similar sensitivity to the landscape and the human history within it.

Kate is a published poet (Flock of Words) and novelist (The Errant Hours).  She writes beautifully about the rural landscape, with a knowledgeable eye for the detail of flora, fauna, and geology.  There is also a historical/mythical content to her work which clearly links with her background in archaeology and in museum education.

My drawings of abandoned dwellings/cabins were an initial starting point of interest, and in particular, the curious dilapidated structure which I had found whilst walking near Shelton on the outskirts of Shrewsbury. 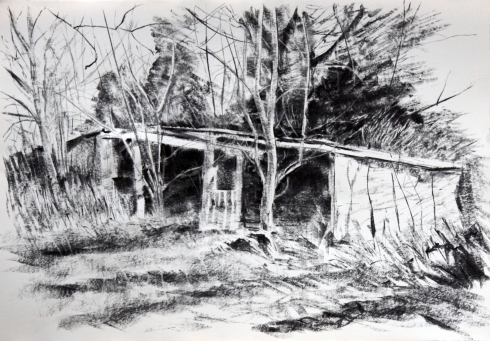 Kate, too went on foot to visit the place, and like me was drawn to the atmosphere of this small patch of woodland high above the River Severn which can be glimpsed through the trees.  A group of people have been using the area as a gathering place and trees are marked with paint, bits of fabric and plastic, like totems.  It felt tribal or ceremonial, like an ancient sacred site.

Kate’s poem “The Other Land”  captured some of the thoughts that come to my mind in these edgeland places:

“…at the edge of places we don’t belong

(Extract from “The Other Land”)

We discussed our responses to these enigmatic isolated and empty structures set in woodland, and explored some of the issues raised in my earlier post around Bachelard’s “Poetics of Space”, the temptations of the “hermit’s hut”, refuge/retreat, and the negotiations that must take place when two people take up residence.  The titles of my trio of drawings “When Adam delved”, “And Eve Span” and “Who was then the Gentleman” struck a chord with Kate, referring to John Ball’s speeches that helped inspire the Peasant’s Revolt of 1381.  These words relating to equality and social justice resonated.

I went on to develop studies for a painting of the shelter we had been to visit, which responded to “The Other Land” referencing certain features from the poem, like the coppiced trees.  These included ipad drawings, a charcoal study and two oil studies: 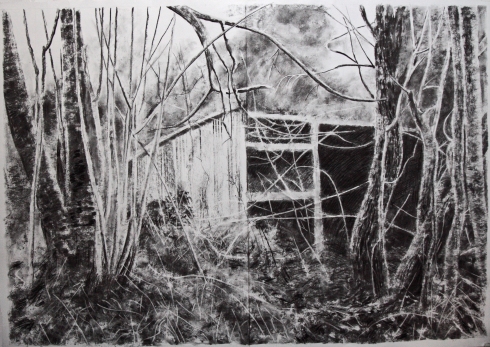 I made two paintings, quite different in scale and in style.  The first was a small acrylic painting made in reverse on an acetate sheet, the second was a large oil painting on canvas: 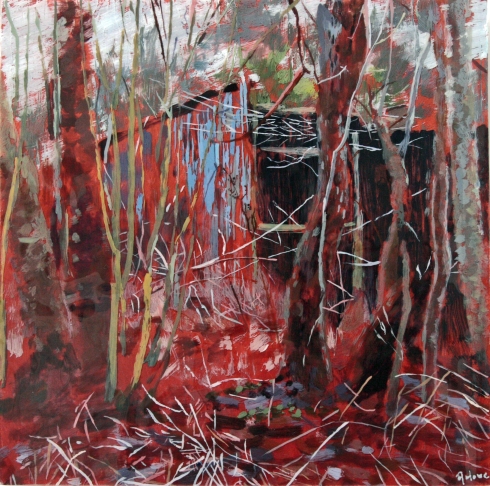 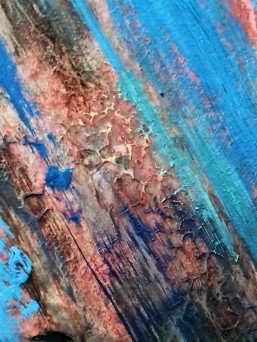 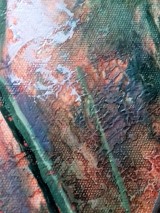 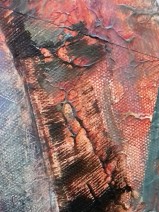 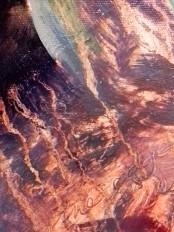 I can see flaws that niggle, but in general I’m pleased with the brooding feel to the paintings.  There is just enough rawness, texture and painterliness in the markmaking.  The brief period for the collaboration (around 3 months) encouraged a disciplined approach and a need for some risk taking.

Kate crafted a poem entitled “Adam’s Return” which responds to Shelter, and also to the trio of drawings, referred to above.  To close this short narrative, she drafted a third poem specifically in response to “And Eve Span”.  The sparse, measured style and ambiguous timing or timelessness of the poems’ positioning is, for me, reminiscent of the novelist Jim Crace, or perhaps more distantly Cormac McCarthy.

“He found the gate unguarded – except by thorn –
the angel gone

The forgotten trees had dropped their fruit
and multiplied…”

(the opening lines from “Adam’s Return”) 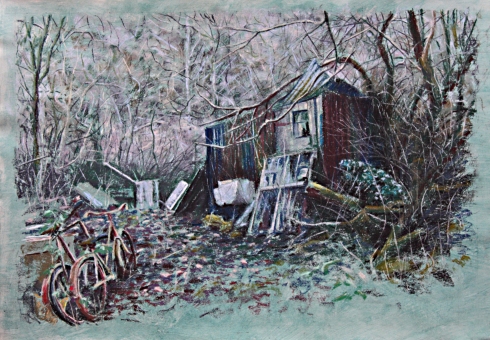 “And Eve Span”, pastel on paper

(Extract from “And Eve Span”)

It was a privilege to see how subtle changes in wording in the few iterative drafts enhanced the poems, shifting emphasis, refining rhythm, suggesting alternative perspectives, picking up on certain aspects of the paintings.  The three poems expand meaning and add greater depth to the paintings, and it was a pleasure to be a part of it.