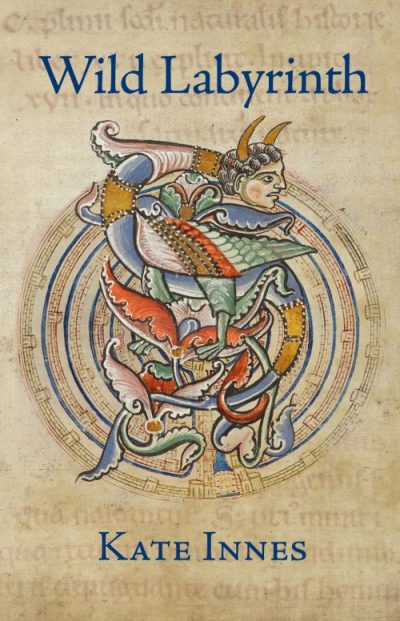 Everyone is rushing to make use of the new shrine. The monks are lining up pilgrims, standing waiting with their quills already dipped in the ink to record the new miracles. Yesterday, a blind girl was healed, but Thomas was only warming up. Today the Bishop expects a resurrection (p. 103)

As a medievalist and pilgrimage researcher, it would have been difficult not to love Wild Labyrinth.

Set in the years 1306 and 1307, the story follows the peripatetic adventures of Lady Illesa Burnel, her daughter Joyce, and a fluctuating cast of miscellaneous travellers. Readers are taken on a journey to a number of well-known pilgrimage shrines including Hereford Cathedral where the recently deceased Thomas Cantilupe is attracting miracles and pilgrims, and the shrine of Our Lady of Rocamadour in France with its famous miracle-working image. On the way, we’re introduced to a variety of fascinating and intriguing characters. Among them are the villainous Reginald the Liar, the misunderstood joculator Ramón, and the enigmatic creator of the Hereford Mappa Mundi, Richard Orosius.

As Illesa and Joyce journey from London to the Midlands, and then through France to Rocamadour and back again, the medieval realm is brought vividly and convincingly to life. We get a glimpse of the world of itinerant court entertainers, we’re taken inside Westminster Hall to see the mass dubbing of knights ahead of Edward I’s Scottish campaign, and we witness the arrests of the Knights Templar in France instigated by Philip IV.

More disturbingly, we’re also shown a darker side of medieval travel when mother and daughter suffer a violent attack at the hands of a would-be rapist. However, it is this terrifying ordeal which sets the two women on the road to Rocamadour, one seeking redemption and the other a miraculous cure. On their journey they meet a variety of other pilgrims, all with their own motivations for travel. The disquieting way in which fellow travellers come and go hints that there are many twists and turns in life’s labyrinth and the goal sought is rarely close at hand.

Wild Labyrinth is meticulously researched. As well as being knowledgeable about her historical period, the author is well-versed in medical plant and herbal lore which helps to situate the story in an appealing, but culturally distant, past. With its well-drawn characters, its nicely paced narrative, its compelling storyline, and its beguiling medieval setting, this is a deeply immersive tale of travel and adventure which stays with the reader long after the journey to the final page is completed.

Wild Labyrinth is Book Three of ‘The Arrowsmith Trilogy’. If you’d like to read these medieval literary adventures (The Errant Hours – Book One and All the Winding World – Book Two) they are all available from my Website Shop – Amazon – Bookshop.org – and Shropshire book shops.