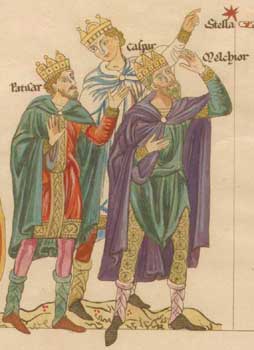 ‘We Three Kings of Orient are,
one in a taxi, one in a car,
one on a scooter beeping his hooter,
reading the Shropshire Star.’

This delightful version of the famous carol is sung by my children and, presumably, many others, whenever the Christmas excitement becomes too much to bear.  Perhaps I don’t always join in with the enthusiasm that it deserves.

We don’t pay much attention to the Three Kings now, except on Christmas cards where they are presented as the instigators of the Christmas gift.  (In a weak moment, at 1am on Christmas morning for example, tape and scissors in hand, I wish that their presents had gone unremarked by the writers of the Bible, as so many other details did.)  Epiphany, the celebration of their visit and the last day of the Christmas feast on the 6th of January, is mainly ignored in Britain and the USA.  Christmas is deemed to be over as soon as the first person has joined the overnight queue for the ‘Christmas’ Sales on the 26th.

In the New Testament, information about the visitors to the baby Jesus is very thin indeed.  There we are told only that they are Magi (Magoi in Greek – soothsayers or holy sages, and possibly the followers of Zoroaster from Persia).  We do not know if they were men or women, and there is no mention of how many Magi, only that there were three gifts.

However, lack of written evidence never stopped a good story.  It didn’t take long for them to acquire the names that are still associated with them in legend: Caspar (Jaspar or Gaspar), Balthazar and Melchior. (meaning ‘The Lord of Treasure’, ‘The White One’, and the ‘King of Light’.  Interestingly these names were used as titles for the pre-christian god, Mithras)  The Venerable Bede (8th century) describes the Magi thus: Jaspar is young and beardless, Balthazar is middle aged with a dark, heavy beard and Melchior is an old man with a long beard.  In the 14th century, a cleric known as John of Hildesheim wrote the Historia Trium Regum, with lots of very pleasing detail about their lives and their deaths.

According to the Historia, Constantine’s mother, the Empress Helena (Saint Helena of Constantinople), conveniently found the bodily remains of the magi on her visit to the Holy Land in 326-8 AD, along with the true cross and many other relics to bolster the new religion of Christianity in the Roman Empire.  She took the three kings to Constantinople and installed them in the Hagia Sophia.  Their travels were not over, however.  Due to power sways between East and West, they were moved to Milan in the 6th century, and then taken by Frederic Barbarossa, the Holy Roman Emperor, to Cologne in 1164, after Milan rebelled against his rule.  Cologne Cathedral has just celebrated 850 years of hosting these relics.

During the Medieval period, Cologne capitalised on their presence as most towns with venerable relics did, by encouraging pilgrimage.  The Three Kings were said to have the power to protect travellers, to prevent epilepsy, sudden death and misfortune, and even to cure snake bite.  Many badges and rings were sold engraved with their names as amulets.

But studies done on the skulls and contents of the reliquary in 2004 have revealed nothing that denies their claimed provenance.  The fabric found is consistent with that of 2nd/3rd century Syrian cloth.  The three skulls are of a young man, a middle aged man and an old man, as shown by the fusing of the cranial sutures.  The mystery remains.  These enigmatic figures, said to come from countries as diverse as Iran, India and Ethiopia, cast a long shadow.

Whenever I read TS Eliot’s Journey of the Magi, I am reminded that the visit of the Magi to the stable in Bethlehem directly led to the massacre of hundreds of children by Herod’s soldiers, according to the Gospels. Were they led all that way for Birth or Death?

My novel The Errant Hours, set in the thirteenth century, involves a troupe of travelling players called the Three Kings.  As protectors of travellers they help the heroine of the story, Illesa, through many dangers.  What follows is an excerpt from the second half of the book.  I hope to publish the novel, in one form or another, this year.