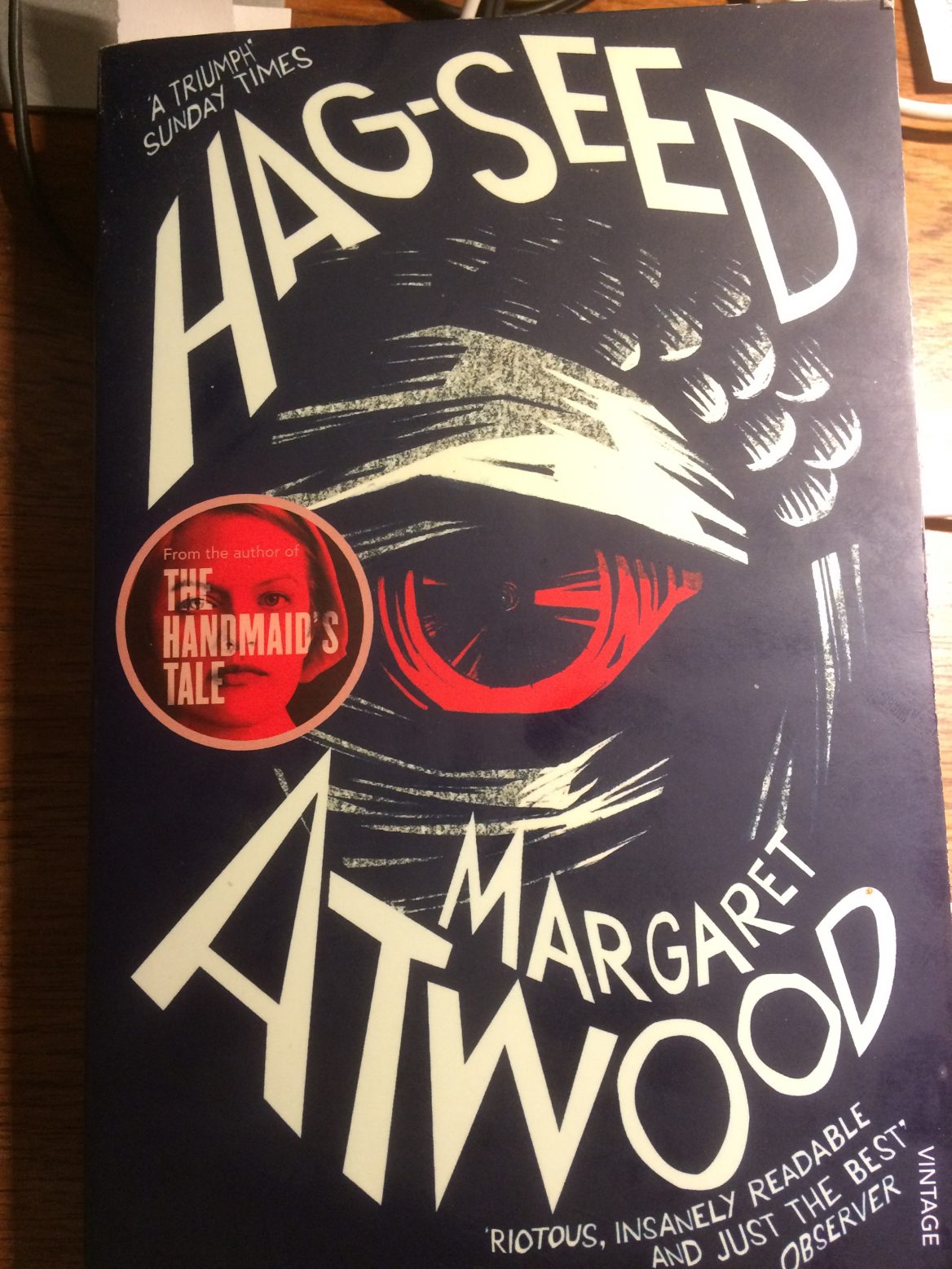 I do hope that all my readers are staying well. I imagine that, like me, many of you are feeling hemmed in by the worries and restrictions of this time. Hopefully this post will provide a bit of distraction – and some brain fodder.

Good Reads for Strange Times number four:
‘Hag-seed’ by Margaret Atwood
Published in 2016 by Hogarth Shakespeare and in paperback by Vintage
301 pages

This is a retelling of ‘The Tempest’ by Shakespeare.
I hope that doesn’t put you off. All my teenage children now hate Shakespeare due to a combination of school exams and a well-meaning mum, convinced that they would love the plays in the end, who took them to one too many. If Shakespeare has not been to your taste up till now, I’d urge you to try this version. It’s definitely different!

In 2016, to mark the 400th anniversary of the death of the Bard, several wonderful writers were commissioned to select one of his plays and reimagine it for our time. Margaret Atwood’s version of ‘The Tempest’ is the only one I’ve read, so far. I’ll pop the list at the end (sourced from Wikipedia) – in case you’d like to try another one of them. I quite fancy the retelling of ‘The Taming of the Shrew’ – after whose main character I was named in 1968.

Back to Hag-seed. You may know that the title is one of the insulting names given to Caliban – the monster-like servant of Prospero – the magician at the heart of the story of The Tempest. Caliban is treated badly by everyone, and blamed when this treatment leads to his offending behaviour. It is mainly but not exclusively with Caliban that Margaret Atwood’s sympathies lie. And that is why in this version, her version of the play, ‘The Tempest’ is being produced by a usurped artistic director who has ended up working in a Canadian prison on an Education through Theatre project.

Rereading it, I found that by page two I’d already come across the word ‘lock-down’. The inmates of the Burgess Correctional Institution are, like us, temporarily restricted in their movements, but not in their minds. They have already done MacBeth and Julius Caesar. They’ve explored the dramatic possibilities of murder and ambition. But this year, their director insists on the play of ‘The Tempest’ – the tale of the usurped ruler of Milan who is left for dead on an island, but whose enemies are brought within his grasp. And so it is within the play that is performed within the story of the play. Margaret Atwood enjoys messing about with these feedback loops with her incisive, driven, witty prose.

It’s an addictive, sly interweaving of a character-driven modern novel with the legendary, supernatural, revenge drama, peppered with the convincing and bizarre details that Atwood creates to spark her inventions into life. It’s got her trademark nose for corruption and the worst parts of human nature, with the eventual, almost inevitable, practical acceptance of love and forgiveness. It’s got her surgical gaze at political power play – told from a victim’s point of view who is allowed to reverse his role.

I found that one of the most enjoyable aspects of the book was the rapping versions of Shakespearean verse. She pulls off these leaps from what we might think of as high to low culture with such a light, adept touch that we realise there is actually no yawning chasm between them. Here’s a little example from the prisoner ‘SnakeEye’ who is playing Antonio (the usurping brother of Prospero):
. . .
“He was stuck in his book, doin’ his magic,
Wavin’ his wand around and all that shit,
I took what I like, and that was fine,
Whatever I wanted, it was mine,
I got so used to it.
But he didn’t look, he was slack, didn’t watch his back,
What a fool, not cool, laid out the temptation,
I was bossin’ around the whole Milan nation,
He didn’t see what I took, it turned me into a crook,
Turned me into his evil twin, I went the way of sin,
Only way I could win.

So I went to the King, the Naples King,
He wanted control of that Milan thing,
So we made a deal,
He’d help me steal it, I’d pay him back,
And we grabbed my Bro, that Pros-per-o,
In the dead of night,
We paid off his guards so they didn’t put up a fight . . . “

Atwood’s humour and humanity shine from the story like a lighthouse on a rocky island. Hag-seed is a quick and engrossing read – that equally rewards rereading. I hope you enjoy it.