Just such a poem came from my innocent exploration into early English poetry.  I was already familiar with the story of Beowulf.  As a child, I had a book about heroes and mythology which contained some wonderfully gory pictures: Beowulf with Grendel’s severed arm, and even more intriguing, the monster’s mother, fiercer than her son, fighting with Beowulf in her underwater cave. 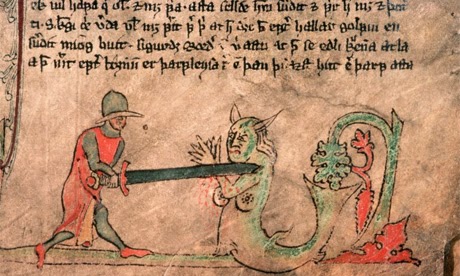 Certainly Grendel and his mother were portrayed as monsters, and have been in most retellings of the tale.  Grendel is a night-goer, a shadow-walker (sceadugenga).  He and his mother are said to descend from Cain, the first son of Adam and Eve, and the first murderer.  They move ‘beyond the pale’ in Seamus Heaney’s translation, and he refers to her as a ‘monstrous hell-bride.’

It was only when I started to look into the original that I discovered that the word used to describe Grendel’s mother, anglaeca, is also used to refer to Beowulf himself.  Some scholars believe that it should be translated as ‘fearsome’ or ‘warrior’ rather than ‘fiend’.  In the Beowulf manuscript, she is referred to as an ‘ides’, a respectful way of saying ‘lady’.  Elsewhere she is simply called merewif, a woman of the mere.  Perhaps there was a territorial dispute about land use at the heart of this conflict between the mead hall and the mere.

Whatever she is or was meant to be, her words came through very strongly as I wrote.  This voiceless character had things she wanted to say.  Principally she wished to offer Grendel some advice.  He ignored it, which is every child’s prerogative.

The alliterative style is typical of early English poetry.

The Mother Speaks
The marsh meets the sea, its master.
Banks are broken and the fresh blood
of frogs and snakes is stopped with salt.
Waves snatch chunks of earth to chew,
and all meat moves on muffled feet.
Muttering mead-soaked men who
gladly condemned our kind to Cain,
fearing the fiery ferment of our mere,
resolved to dig a drain and dry it.
So I must send my son, my boy,
armed and toothed with dread,
a hothead, always hungry,
to hunt for me in Hrothgar’s hall.
My incantations have thickened his hide.
Rocks are no harder, oxen no stronger.
Let them hew; he will meet no harm.
Come son, wash well in the water,
with luck it will cover your smell.
Be stealthy and slip inside
the circle of staves where smoke rises,
and the tall posts of the traitor’s hall.
Hinges will bend in your heavy hand,
but don’t wake the dogs by the door.
Creep through the sleeping thanes and
slake your thirst at a throbbing throat.
Bring a young boy back and I’ll blow
the keen of his death through my teeth.
But lead not the living to our lair,
Grendel.  Stop their groans and grief
in your mighty grip and meet me here below.
Kate Innes