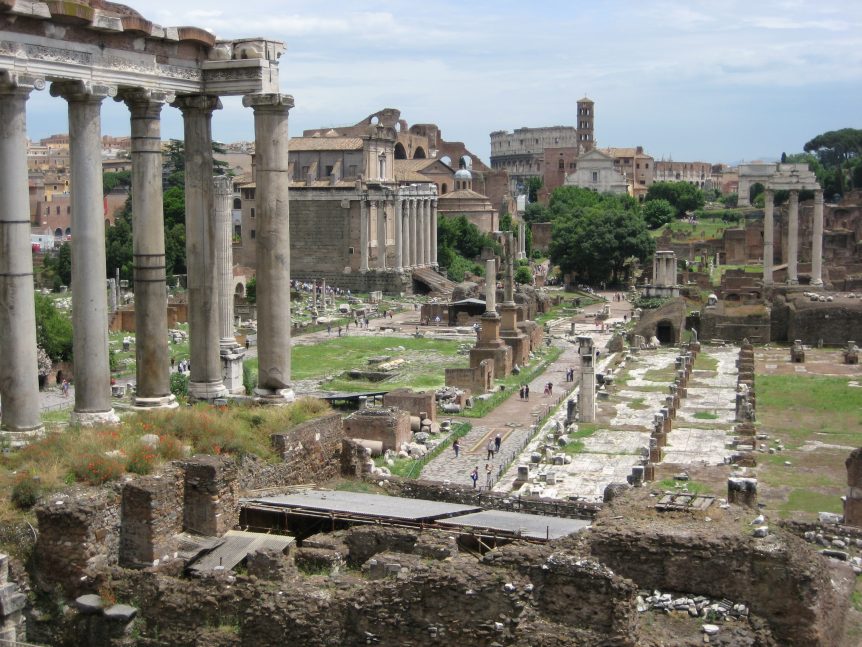 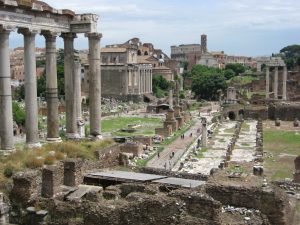 The Roman Forum (photo by traveldigg)

A while ago I was asked to introduce Lindsey Davis, who was speaking at the inaugural Shrewsbury Literature Festival on Saturday the 26th November, 2016. As part of introducing this grande dame of historical crime, I was invited to say a few words about my own writing, and some of the points of cross-over. What follows is the talk I gave, which I hope properly expressed my admiration for Lindsey and what she has achieved.

I am delighted to be here today at the inaugural Shrewsbury Festival of Literature to introduce our guest – Lindsey Davis.

It is a privilege to share the stage with you Lindsey, and I am very much looking forward to your talk.  In the meantime, I have a few minutes to speak about this interesting type of literature, Historical Fiction, why we write it and why we love to read it.

I’m interested in how we become intrigued by history. The past is gone after all, and on we go into an ever disappearing future. So what draws us back to the things that are long gone?

Everyone has their own experience, but in my case, and I am sure for many others, the introduction to history comes through stories set in the past, in other words Historical Fiction. I suspect that good historical children’s books have done more for our understanding of the past than all our school history lessons.

I grew up in the USA on the East coast. There the earliest buildings are 250 years old, and most are less than 50. The history taught was almost exclusively American. I relied on literature, through our excellent local library, and on Museums to teach me about the world and its past. And early on I came to be fascinated by Greek and Roman mythology.

This laid the groundwork for my interest – but to become a proper history addict there is nothing like being able to touch the real thing. 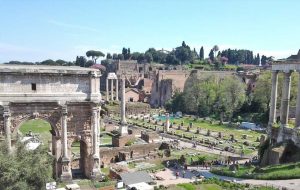 One of my most formative moments, was in the early 80’s as a RaRa-skirted 14 year old on a school trip to Greece and Italy. We stayed in Rome and visited the Forum. The sheer scale of the remains astonished me. Carved capitals, the outlines of shops, walkways, temples. The imprints of both the daily grind and the metaphysical. What I felt on that day stayed with me and never let go. By the end of high school I had made up my mind. I would go to England and read Archaeology at University, and have that thrill all the time, the sense of touching the past.

But as we know, not everything is quite as you assume when you are a young adult. Archaeology, it turned out, was much more about resistivity meters, microscopic sections of pottery and Carbon dating than it was about my more romantic notions of reaching into history.

After my Archaeology degree, I turned to teaching and then to Museum studies, becoming a Museum Education Officer

Perhaps you are thinking – that is all very well. Kate and Lindsey share a love of the past. Particularly the classical past. But what about the CRIME?

Well, I have also done my time in crime. About 22 years ago, between careers, I had a job in a bookshop on Manhatten’s Upper East Side which sold exclusively Crime and Mystery books. It was called ‘Foul Play’. In those days, most people who were looking for information about businesses would look in the phone book. With a name like ‘Foul Play’, we had quite a few phone calls from people assuming our services were of quite a different nature to book selling.

Of course, it does not necessarily follow that avid readers and booksellers become writers. Personally, I knew from a very early age that making up stories, creating new worlds for the reader, was a superpower I wanted to possess. And to time-travel as well, by writing about past civilizations – that would be the ultimate trip.

The first stop in my time travelling journey was the Medieval period. My debut novel The Errant Hours is set in the 13th century AD, in the Marches and North Wales just after the end of the Second Welsh War.

It is a love letter to this part of the world, with its stunning historic and prehistoric landscape. It is an adventure that gallops through most of the medieval monuments in South Shropshire at a heart-stopping pace. It is also an exploration of the power of books, stories and legends.

And at the heart of it, there is a young woman in possession of an extraordinary book, a manuscript describing the Martyrdom of St Margaret of Antioch. In other words, the manuscript is a work of Historical Fiction.

The saints who were worshipped in the Middle Ages attained their positions mainly thanks to Roman persecutions of the upstart Christian religion. The accounts of these crackdowns were embellished by later writers into pious and bloodthirsty tales, to encourage veneration of the saints. So when I came to write ‘The Errant Hours’, I had a perfect excuse to include a section that goes back to the Empire. 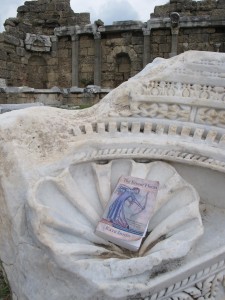 St Margaret of Antioch was a virgin martyr, and her story is typical of the genre. Daughter of a pagan priest, she converts to Christianity against his will, and is disowned. Then, as she wanders amidst the goats on the pastoral hillside, she is spotted and desired by the Roman governor. He insists upon ‘marrying’ her. He also insists that she renounce her faith. She refuses. So he has her tortured in various horrible ways before she is beheaded in front of a large crowd.

How this VIRGIN ended up becoming the medieval patron saint of Childbirth is a fascinating story, and one I explore in my book. But in writing about her, what I really wanted to know was – without all the later religious spin – what would it really have been like to be a young woman of the Roman Empire, who was imprisoned and tortured for her faith? 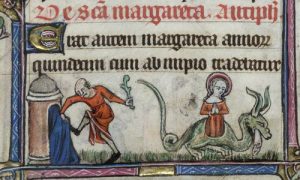 Perhaps I should have looked at some other saint, who had a really friendly story with a happy ending.

But, in spite of the gore, I was thrilled to be imaginatively back in the midst of Roman culture, their buildings, their admirable sense of order, their productivity and their pragmatism. Writing is the ultimate Virtual Reality head-set, in my opinion. I cannot explain the deep-seated desire I have to be in that state of the imagined past, but perhaps it has something to do with never knowing what will happen next in real life, and needing a place of escape. I suspect that most readers feel similarly, in wanting to experience the best and the worst of life, but in a safe environment.

Lindsey Davis has been treating people like us to immaculately researched, accurate and entertaining stories set in Ancient Rome for three decades. She has peopled the ruins with restaurant owners, politicians, merchants, lovers, whores, and most significantly informers. Marcus Didius Falco and his daughter Flavia Alba are fully rounded people, not characters. Through them we experience the rest of the Roman Empire, explained with, at times, frustrated affection.

And what a close relationship there is between the activities of Falco and Flavia – and our own efforts as writers of historical fiction.

For don’t we have to examine the remaining evidence, the records of the lives, the scenes of the action. We must hold in our mind the pieces of this puzzle and fit together the fragments of ‘truth’. Then the imagination creates the story and the motive – and it provides an explanation of the mystery: What was it like to experience the push and pull of a particular economy, culture and belief system? And what punishments will come?

Lindsey’s observations don’t only enlighten us about the Roman Empire, she also makes us see and celebrate our own culture and our modern world in the light of history.

Whilst researching for this event, I was delighted to find on Lindsey’s website a section entitled ‘Rants’.

We all can appreciate the satisfaction of a good rant, I’m sure.

Upon being told by the large and rather insular American market that her books must be americanised, she only capitulated on spelling. She would not change her particularly British use of words and tone to suit the American ear. My heart was gladdened when I read her words in defense of this position:

“The Falco books are English in origin. Their ‘voice’ is not only English, but narrowly defined on occasions right down to the bolshie British Midlands, in the mid Twentieth Century, with influences from BBC Radio and middle class girls’ education. This voice is crucial. If it means readers have to stretch themselves, then gung-ho and jolly good show.”

And surely that is one of the things we want from a good book, to learn something, to work things out and feel satisfied when we have come to a new understanding. Besides, the joy of a Lindsey Davis novel is in its facility with language, idiom and a sharp turn of phrase. Any number of quotes would prove this point. But let me take one from her recent Flavia Alba novel, ‘Enemies at Home’: 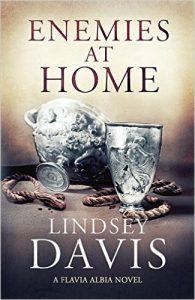 “We now had a paranoid emperor, who at just short of forty was still young enough to inflict many years of dread upon us. Our empire’s borders regularly came under attack from barbarians, so there was constant unsettling military talk. The city was also full of bitter satirists, outlawed philosophers and pouting poets who had failed to win prizes. In this climate, all kinds of madness flourished.”

What a prescient passage. If any country needs to learn from and listen to the outside world, it is America and its leader at this present time. And I’m sure those of us who frequent Facebook will recognize what a frenzied atmosphere can erupt from a glut of satirists, philosophers and poets.

It is my great pleasure to welcome, therefore, one of our own. A multiple prize-winning writer born in Birmingham, who has delighted millions of readers with her humour, her insight, her lightness of touch in the face of gruesome crime – and her productivity.

After 20 Falco and four Flavia Alba books, as well as wonderful stand-alone novels, we all hope there will be more and more and more.