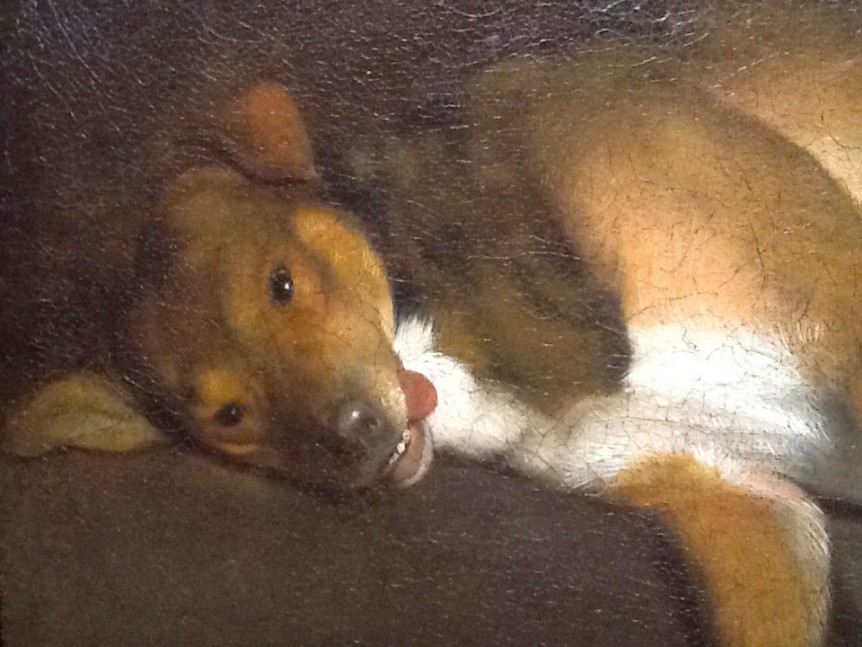 This painting caught my eye when I was last in the Ashmolean Museum in Oxford.  The unknown artist has captured the dog just as it wakes and before it has become alert.  It lies on a cracked ledge in a city street, somewhere in the 17th century.  The Ashmolean online catalogue describes it as a ‘plebeian’ dog, a rare depiction of such an everyday creature at a time when the aristocracy commissioned paintings of expensive horses and hounds to display their wealth and status.  The artists Van Dyck and (later) George Stubbs would become masters of that genre.

But the Ashmolean painting is of a nameless dog, owner (if any) unknown, by a mysterious artist.  Anonymous in every way and shown at its most vulnerable.  The bare patches on a dog’s ‘knees’ and ‘shoulders’ are there, the shine of a wet nose, the ears askew and the protruding pink tongue that says ‘I might be asleep, but that does not mean I wouldn’t appreciate some food’.   If you go on this website you will see the detail that I was unable to capture with my iPad.  http://www.ashmolean.org/ash/objects/makedetail.php?pmu=730&mu=732&gty=asea&sec=&dtn=15&sfn=Artist%20Sort,Title&cpa=1&rpos=0&cnum=&mat=&pro=&anum=&art=&ttl=a%20dog%20lying%20on%20a%20ledge&sou=

This painting, despite the subject being a mongrel on the streets, was owned in the 19th century by Louis-Philippe of France and displayed in his famous Spanish Gallery.  One reason, apart from its appeal as an example of trompe l’oeil, may be that it is a very honest painting.  It does not flatter, but neither does it denigrate.  The dog is painted with a flash of real life in its eyes, and all dog owners will recognise that moment, no matter what breed they live with, when the dog is completely relaxed and at its most elemental.

The descendants of the dog in the painting can be found making their way through towns and cities across Europe, sleeping where and when they can amongst the noise and hazards of human society.  They are opportunists, always hungry, and willing to befriend those who treat them with a degree of kindness and generosity.

As creatures of instinct, they are able to act according to their needs without the self-consciousness that plagues us.
Perhaps that is why we delight in watching them sleep.

Sleeping dogs
Anywhere, with abandon,
on floor or gravel,
or threadbare rug,
in sun, in shadow,
overwhelmed by need,
like babies
making their own blanket
of warm breath.
The paws canter
to the muffled woof
at retreating enemies.
That chase on the retina
of the mind played out;
the muscles’ work
in miniature.
We smile, are tempted
to touch and wake,
but then resist
and let them lie.
Let them snatch at
a faster, fiercer life.
Let them dream
the wolf inside.
Kate Innes