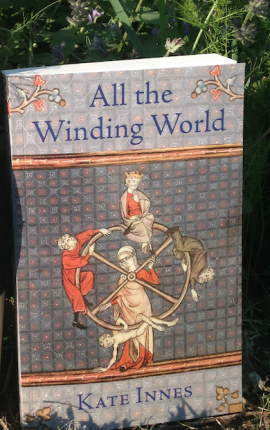 I don’t know if all writers are like me, but when I send a book off for review I immediately assume that the reviewer is going to hate it, even though other readers have loved it. Just the fact that the person is an official reviewer makes me break out in a cold sweat.So when I was contacted by the Historical Novel Society last week with the news that a review of my latest book was being published in the November issue of the HNS magazine, I had to screw up my courage to click on the link.

I was so relieved. Not only did the reviewer, Misty Urban, say many lovely things about ‘All the Winding World’, but she also happens to have a PhD in Old and Middle English. To know that a medieval expert approved of the world I had created was immensely gratifying.

I owe thanks to the Historical Novel Society who work hard to promote good historical fiction, and to their reviewers who voluntarily give up their time to help authors. They probably know that a good review to a writer is like Christmas Day to an eight year old.

For all the happy excitement you have provided, I thank you reviewers everywhere!

All the Winding World

Innes brings her poetic sensibilities to bear in this lovely sequel to The Errant Hours, set ten years later. Illesa is married to Sir Richard Brunel, has borne three children and lost one, and is happily settled at their small manor farm in Shropshire when King Edward’s call for war to regain the lost Duchy of Aquitaine summons Richard, despite his maimed leg and missing eye, back to the battlefield. French treachery lands Richard in a Bordeaux prison, and Illesa launches a dangerous scheme to trade a priceless clerical garment for her beloved’s life. Helping her are Gaspar, a witty traveling player carrying a fatal secret, and Azalais of Dax, a skilled trobairitz (female troubadour) trained in the songs of courtly love.

Innes’s accurate details and descriptions of the furnishings and landscape of life in late 13th-century England and France are a pleasure to revel in. She conveys the richly textured sense of a world bloody with war and other hazards, clocked by the rhythms of the natural seasons and Church time, and saturated with that strain of medieval Christian piety peculiar to Western Europe. Though the plot is satisfyingly suspenseful as Illesa drags herself and her friends into the arms of their enemies, the most vivid character is the setting, the buildings and cities that come alive with all their strange accoutrements: priests and Templars, precious books and costly clothing, pet weasels and cunning tax collectors. Innes’s poetry makes an appearance in the songs sung by Azalais, an enigmatic character who deserves her own book. This skillful crafting of and immersion in a brutal, beautiful, breathing world rife with treachery, disease, and dangers unseen will enchant readers new to the period and delight those who know it well.