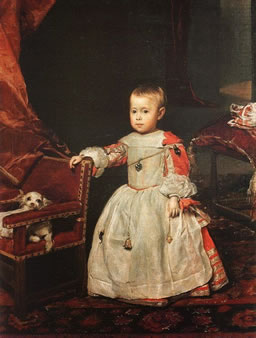 I remember clearly the moment I stood in front of this painting in the National Gallery in 2006.  Of the rest of the Velázquez exhibition, I remember nothing.  The label next to it stated that the Infante died two years after this portrait was completed.  It described the objects draped on his clothing as ‘bells to inform of the prince’s whereabouts, an amber apple against infections and an amulet against the evil eye.’

On the velvet chair, Velázquez has painted the likeness of a dog for which he felt great affection, ‘so that death would not rob him of her completely’, according to the catalogue.  Perhaps this was also why the portrait of the Infante was commissioned by his royal parents.

His fragility and the formality of his surroundings seem at odds.  For me, it is the chaos of accident and illness that we can never fully tame nor control, no matter how much earthly power we have, that hides in the shadow at the back of the picture like a giant mouth.

And in my mind, this portrait stands for all those that were never painted, of the loved and the lost. 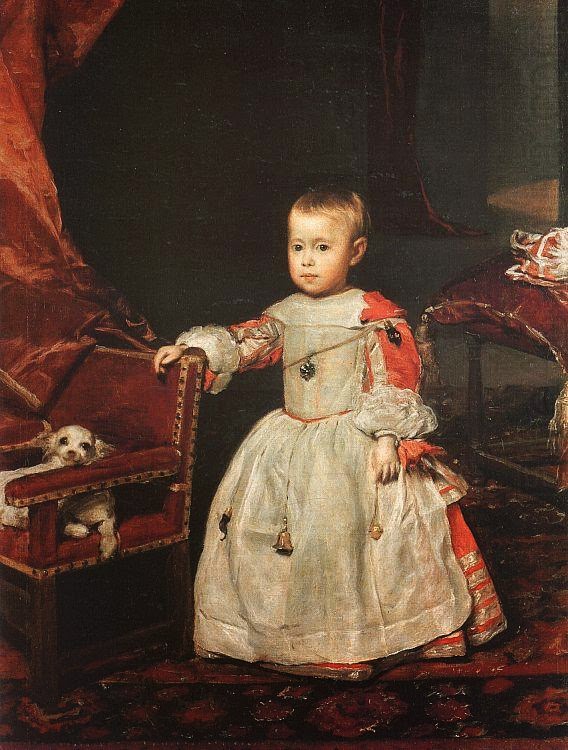 In the Kunsthistorisches Museum, Vienna
Infante Felipe Próspero     1659
Diego Velázquez
Notice his eyes first.  He is looking at you,
wondering if you pose a threat.
His dog is no protection, lying, as it does,
on velvet like a discarded glove.
His amulets may draw your gaze next.
They hang on golden chains,
and his fingers, white as bone,
play with an incense ball.
Encased in cloth and kept inside,
away from hot light and cold wind,
he is pressed and pinned and prayed for.
Fingered by countless Asturian seamstresses,
who stitched and sneezed and coughed,
fed tidbits from the kitchens where
chefs spat and scullions wiped their noses;
he has no defense.
Behind him blackness gapes,
hiding the throne on which he will never sit.
Even without the sun, a palace has many shadows,
but this boy, already a ghost,
casts none but this.
Kate Innes