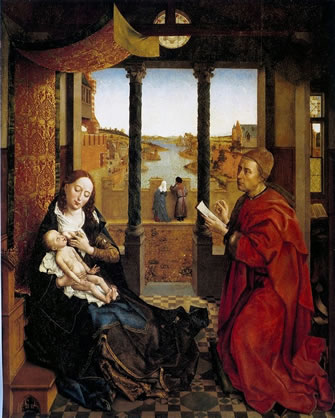 “That’s what breasts are for, stupid,” declares a sign held by a protestor outside Claridges Hotel in London on the 9th December (see The Independent online article 9/12/14).  Yet another mother being asked to move, or to cover up, or to sit in a toilet in order to feed her child has caused anger amongst many women who are baffled by this society’s inability to cope with the breast as the natural means of feeding a baby, rather than as a sexualised object.  Breasts are allowed in plain view on the front cover of magazines, on page three of newspapers but not, it seems, in a baby’s mouth.

No such attitude bedevilled the Medieval and Renaissance mind.  In many of the thousands of portraits of the Virgin Mary with the infant Jesus, produced by artistic geniuses over several centuries, the Virgin’s breast is unashamedly visible.  Sometimes she is even expressing milk.  One can’t help feeling that any art on this subject today would cause apoplexy amongst certain right wing politicians.

Symbolic of the miracle of divine fertility, the image of the Virgin and Child is also drawn from the tradition of the Mother Goddess, a deity worshipped for centuries throughout European Society before monotheistic religions took hold, and thought to be responsible for fertility of all kinds.  This served as a reminder in the dead and dark of winter that life would return, bright and miraculous from the cold earth, and with life would come food and drink aplenty.

Nowadays we have changed the emphasis of Christmas from natural/divine fertility to human creativity and consumption.  Our main symbol for Christmas is Santa with his sack full of man-made, or rather machine-made, toys.

But originally the central player of the Christmas narrative was a girl, forced to give birth (one of the most dangerous act in a woman’s life) in a stable in an overcrowded town, because of a brutal and bureaucratic government.  The baby went on to become a refugee in Egypt, and when he grew up he led a life of material poverty and kept company with outcasts and the sick and disabled.   Later he was made a political prisoner, before he was executed.  There is no part of Jesus’ message in the New Testament which encourages the accumulation of worldly goods.

But according to the Gospels, he also turned water into wine, ate and drank with the rich, and described the Kingdom of God as a banquet.  The Jesus of the Bible understood that there were times to eat and times to abstain.  Consumption did not rule him.

I approach Christmas with ambivalence nowadays.  I have lost the sense of anticipation and the discipline of Advent, because in the society I live in, everything from mid-November onwards is about Christmas as a celebration of overindulgence.  It is now the panacea for winter blues, the saviour of the economy, the fulcrum of the financial year between income and debt, and selling and sales.  In our society, it seems to have become as divorced from its original meaning and purpose as the breast is from feeding babies.

Virgin and Child
(St Luke drawing the Virgin by Rogier Van der Weyden, circa 1435)
She sits upright in an open casement, her back turned
to the imperial battlements embanking an azure river.
She wears a rich brocade of swirling flowers
and her face is a tender arc of brow, eye and lip.
With one hand she holds him, with the other she offers her breast.
But he is a strange baby, naked, made of angles;
his fingers and toes are rigid in their flesh and skin.
There are creases around his eyes, almost from laughter,
or as if a great thing once gathered had then been unfolded.
She brushes her nipple on his cheek,
waiting for him to turn and suck, but he just looks at her and smiles.
This child unconcerned by cold or hunger, he will become the one who said:
‘Is not life more important than food
and the body more important than clothes?’[1]
Kate Innes
[1] Matthew 6:25